Compass 2030 CoLab is part of a larger project, The Agenda 2030 Compass Methodology and toolbox for strategic decision making.

That project's goal is to create a tool that provides insights for decision makers into how actions they are considering will affect the likelihood of making progress on the UN’s Sustainable Development Goals (SGDs).

The tool will be used in workshops that start with a 17x17 matrix showing the nature of the interactions between the SDGs in a particular country or region.

Each cell in the matrix will indicate, using color-coding, whether making progress on one SDG is likely to encourage progress on the other.

The tool will then show the expected impact of strategies under consideration, thereby offering decision makers new perspectives on the tradeoffs they face.

The method for assessing interactions between SDGs is based on research by Stockholm Environment Institute and uses a 7-point scale, from +3 Strongly reinforcing to –3 Strongly counteracting (See Figure 1). 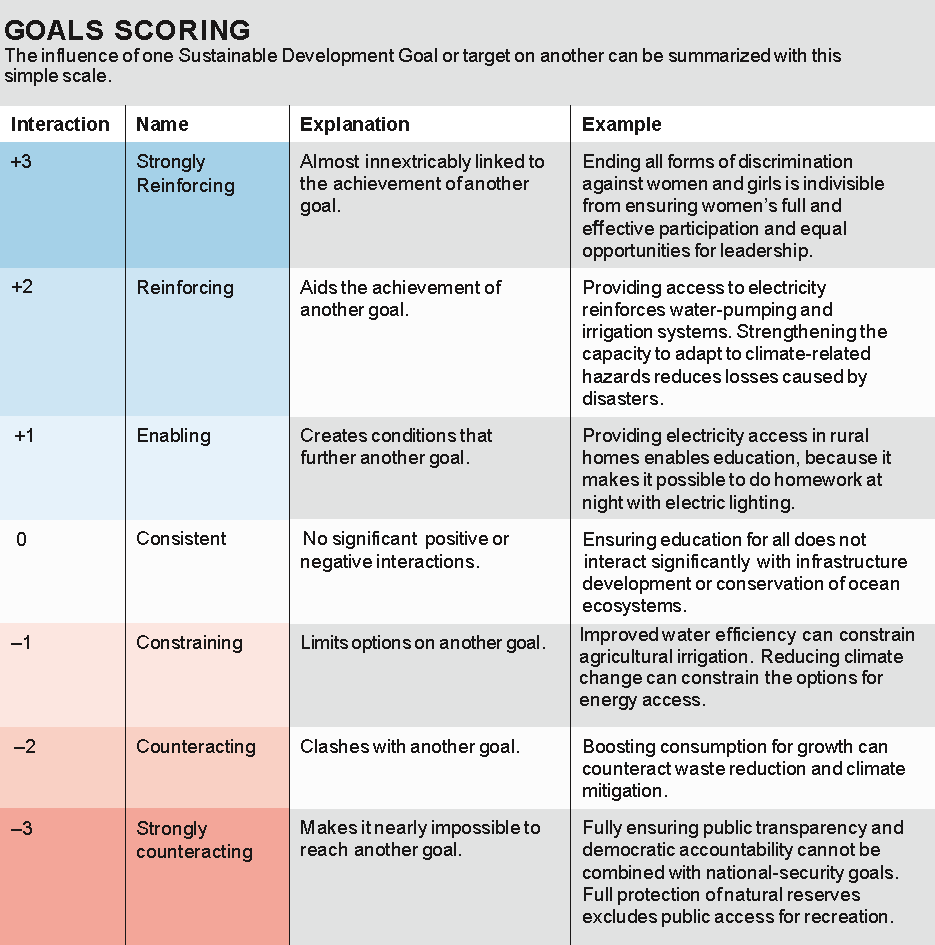 Agenda 2030 project seeks to enable creation of an interaction matrix for any country.

This objective could have been accomplished using a bottoms-up approach, in which polling of local experts informed development of a separate, bespoke matrix for each country.

After considering this approach, the Agenda 2030 Compass team recognized it would be prohibitively labor intensive.

The team instead chose to apply an alternative, more scalable approach: to create interaction matrices based on key characteristics of countries, which the team called factors.

A factor is defined as a characteristic of a country with the potential to influence the interaction score for one or more SDG pairs.

Consider, for example, one country that has strong social protection policies and another that does not.

For the first country, progress on SDG 7 Work and economic growth would likely be associated with progress on SDG 3 Health, whereas, for the second, the linkage would be far less certain.

Thus the pair SDG 7 --> SDG 3 would have a higher interaction score for countries with a high rank on the factor social protection.

After developing the concept of factors, the team faced the challenge of identifying which are most salient.

A panel of 17 experts, one for each SDG, was engaged to contribute their perspectives on which factors they thought most likely to influence interactions between the SDGs.

That panel submitted a list of more than 700 proposed factors; through clustering of these into like groupings, 18 meta-factors were identified in 5 categories, each tied to a quantititive indicator:

How participants can contribute

Participants can contribute to 2030 Compass CoLab through one of two interfaces:

After a participants clicks on an SDG or a cell, a form will open to elicit: